One local couple has combined their performing talents on two very different string instruments to create a transformative experience for concertgoers.

When Bin Hu and his wife Jing Xia perform together, a kind of sonic alchemy happens.East meets West, Classical blends with traditional, and the music that results is pure gold — gleaming, rich and beautiful.

There definitely seems to be the hand of destiny in the story of how the guitarist and the guzheng player each chose their instruments, and how they finally met and began playing as a duo.

Bin, originally from Tianjin, China, which is a major coastal city that’s about 20 minutes by train from Beijing, took up the guitar because of his father. “My father went to college for engineering, but he played guitar as a hobby,” Bin explains. “When I was nine or 10 years old, I used to see him play all the time. I got interested in the instrument and asked him to teach me.”

Sadly, his father passed away when he was 14, but Bin had learned to really enjoy the guitar, even playing in a rock band when he was a teenager, and vowed to continue playing to honor his dad. It wasn’t long before he realized that music was what he wanted to pursue as a profession. Starting in the 1980s, it had become very popular in China to learn to play a Western instrument. “Every family with a child wants them to learn an instrument at an early age,” Bin says. Still, earning a living as a musician is a daunting proposition. “How can you be a musician and survive?” he observes of the universal dilemma. “Even my family was against it at first. But I insisted, and I believed that if I had enough enthusiasm I could achieve my goals. I went abroad when I was 18 years old, to the Estonian Academy of Music and Theatre to get my bachelor’s degree. And then I went to Salzburg, Austria, to attend Mozarteum University.”

Jing, who grew up in the picturesque city of Wuhan, China, also began studying an instrument because of her father. In her case, her dad didn’t play, but he wanted his daughter to have the opportunity. “He wanted music to be a companion for me,” Jing says. When she was four years old, she started on the guzheng. This plucked string instrument with harp-like qualities is widely used in traditional Chinese music, and has a lush, soothing sound that makes it ideal for compositions that evoke the natural environment, history and cultures of the land.

The guzheng demands a great deal of dexterity and focus from musicians, but Jing was up to the task, and at age 12, she was good enough that her parents sent her to Beijing to the China Conservatory of Music. “My professor was amazing,” she says of the life-changing experience she had there. “She told me, ‘You don’t just play the instrument. You play with your heart. Maybe you can console people because of their emotions.’ And I thought, ‘Yes, I’d like to do that.’”

It was music that brought both Bin and Jing to the Old Pueblo. In Bin’s case, it was because of a fellow student. “After my master’s degree in Austria, I decided to get a doctoral degree, so I wouldn’t have to worry later if I needed it,” he reflects. “One of my biggest problems was German. If I wanted to earn my doctorate in Austria I had to have C level German, which I do not have. I found Tucson because one of my classmates wanted to come here but didn’t pass the language proficiency. He told me, ‘It’s a great place. You should check it out.’”

Bin wrote to Tom Patterson, the department chair for guitar at UA’s Fred Fox School of Music, and he invited the young scholar for an audition, which proved that he would be a great fit. “I am happy about being here, and people are very supportive,” Bin notes about his doctoral studies in Tucson. “They make me feel really good.”

Jing, meanwhile, came to town as a visiting scholar, and she works with the UA Confucius Institute as an instructor and cultural ambassador of Chinese music. It was her desire to perform with other artists that brought her together with her husband. “I have passion for playing,” she says. “I asked many musicians if they wanted to play Western music with me. But only Bin found the repertoire to try together. That’s how we started.”

One thing that helped to solidify their relationship was going on a challenging journey together, along the route through Spain where legend has it the remains of the apostle James were carried to his resting place. “Two years ago, we did the Camino de Santiago,” says Bin. “Very spiritual. Quite a nice experience, but also very tough. When you do that kind of thing, you’re completely honest with each other. You can’t hide anything. You may be in your worst mood and super-exhausted. I thought, if we can survive that, we will survive anything!”

Choosing compatible repertoire, and figuring out how two very different stringed instruments can share a stage and enthrall an audience, is no easy task. “I want to show the charm of the guzheng with our repertoire,” Bin says of the music that the couple performs together. “For example, we’ve chosen pieces from some of the French Impressionists, like Debussy and Ravel, to show the Oriental influence, and how that would sound on an original instrument from Asia. Some of the Impressionist pieces are pentatonic. The idea is very similar to Chinese traditional music; it depicts a certain subject, like a lake, a bell, or a sunken cathedral like one of Debussy’s works. Traditional Chinese music is the same. It’s always about a cer- tain image or subject. The expressions are very similar, so in that way it makes connections to Jing’s instrument. Plus, I cannot do Impressionist music on guitar alone because the guitar has a very short sustain, and Impressionist music has a massive sound, lots of sustain. But with Jing’s help, we can make it sound bigger and better. There are only open strings on the guzheng, so that adds a certain quality of serenity to the music. When you hear it, it’s very relaxing, the sound of the open string. On the other side, we’ve chosen some Spanish repertoire because Spain was ruled by the Moors for centuries, so the music has a lot of Oriental feeling, like the Arabic scale they use.” 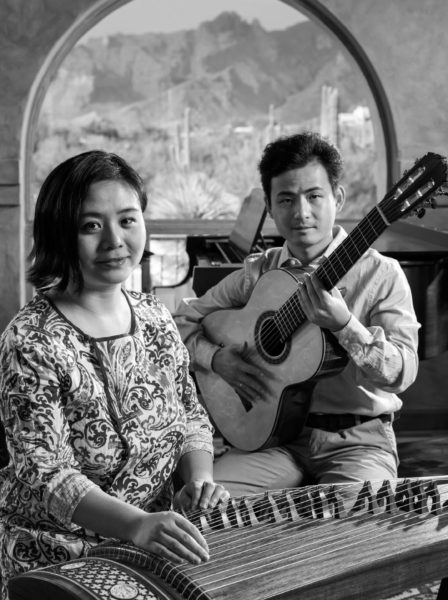 Watching and listening to Bin play solo guitar, on, for example, a Bach sonata transcribed from violin, the nimble way that his fingers fly along the strings, and the gorgeous tones that he gets from his instrument, it’s easy to see how he could have a career on his own. However he says, “After so many years of studying in a conservatory and university, I realized I want to explore the unique side about myself, about being an artist. Although I can play solo, I prefer to have something different, combined with Jing’s instrument.”

During the couple’s concerts, audiences are treated to the multi-cultural, multi- dimensional sounds of the guitar and the guzheng performing together, each instrument retaining its signature qualities, and yet combining to create something great- er than the sum of the parts. Both artists also perform solo, and when Jing is on stage by herself, it’s fascinating to listen to the haunting qualities of her instrument, which can trace its roots back about 2,500 years. It’s also amazing to watch the deftness with which she manipulates the moveable bridges the guzheng employs. “I wouldn’t be able to play the guzheng like Jing,” Bin admits. “But ladies are good at multi-tasking!” Though she often plays on borrowed instruments, the bridges (which are removable) are custom-made for her. They make all the difference in terms of the overall sound. “That’s my secret!” she says with a laugh.

Both have recorded solo CDs. Jing’s is called Water Lotus and has been sold at her performances. Bin’s, which was released by Eudora Records a few years ago, is called Ciaccona. Featuring music by J.S. Bach, the album is dedicated to his father. And while they adapt different classical and traditional works for the two of them to play together, they also are looking for- ward to having works commissioned for their unusual pairing. One composer they have approached is guitarist Sergio Assad, who has heard them perform one of his pieces that they’ve transcribed for guitar and guzheng.

But while the couple stays busy with rehearsing and performing, there’s an even bigger family activity for them: raising their one-year-old daughter Arya (pronounced like Aria). Though they had the classical music world in mind when they chose a name, Bin jokes that they didn’t realize how it would be interpreted back in China. “When we gave it to her, we didn’t think about it. My family name is Hu [pronounced Who], so in China she would be called Hu Arya!”

Coming up in the future for the couple are more concerts, including plans for the Arizona Friends of Chamber Music’s sum- mer series in 2019. As to what tweaks and alterations may be coming to their performances, Bin concludes, “We thought about creating a program with geographic connections, like coming from Spain and going through the Middle East to China, but we haven’t figured out how she can manage all the changes of tuning. I may have to talk more!” –TL